Formed in 2010, the Clyde Duo consists of Irish Flautist, Aisling Agnew and Welsh Harpist, Sharron Griffiths. Aisling and Sharron met while working together at St Andrews University where they both are active teachers and performer’s, they discovered they share a compelling interest in the flute and harp repertoire and since then have performed together across the UK and internationally.

Aisling and Sharron share a passion for performing music from the beautiful vast flute and harp repertoire including music by well known composers such as Debussy, Bach and Rossini, along with music from their native countries, Ireland, Wales and their adopted home, Scotland. They have a keen interest in expanding the repertoire for the combination, premiering many new works and are currently working on a programme of flute and harp music by underrepresented composers.

Aisling and Sharron are in great demand as soloists, chamber musicians and are regularly seen playing with the BBC Scottish Symphony Orchestra, Scottish Chamber Orchestra, Royal Scottish National Orchestra and the Ulster Orchestra to name a few​ 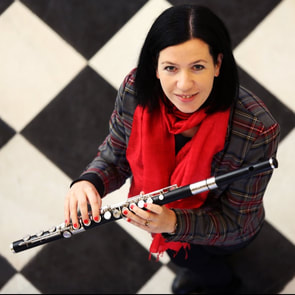 ​​​Aisling Agnew is a flautist from Belfast. She performs internationally and has toured across many continents, performing at prominent festivals such as the National Flute Association’s 40th Convention at Caesar’s Palace in Las Vegas, Jeonju International Sori Festival in Korea, Sarajevo Winter Festival and also closer to home at New Music Dublin, the British Flute Convention in Manchester, Celtic Connections in Glasgow, and the Belfast International Festival as both a soloist and chamber musician. Aisling is host of the successful podcast The Flute NI and has interviewed many performers, teachers and makers about their experiences.

Aisling has made many successful recordings featuring CDs, radio broadcasts and live performances online. She is a graduate of the Guildhall School of Music & Drama and the Royal Conservatoire of Scotland and is the recipient of many awards including the Countess of Munster, Arts Council of NI, Creative Scotland and Belfast Classical Music Bursaries.

Aisling is flautist with Hard Rain Soloist Ensemble in Belfast, specialising in contemporary music and she also performs with the Irish Memory Orchestra, collaborating with Irish traditional musicians. Aisling regularly freelances with various orchestras and performs in a number of specialist chamber groups such as the Clyde Duo with Welsh harpist Sharron Griffiths and the Agnew McAllister Duo with Scottish guitarist Matthew McAllister.

Aisling is involved with a variety of music education projects such as the Ulster Orchestra's Crescendo Project, and has given many masterclasses and workshops including for BBC Ten Pieces NI and Classic Children’s Concerts in Scotland. Aisling has worked with Drake Music, collaborating with musicians with additional needs and she conducts various ensembles including Flute Phonics and St Andrews Flute Ensemble. Aisling also teaches flute at several institutions such as the University of St Andrews Sharron started playing the harp at the age of ten in her native Wales, she has pursued a diverse and varied career as a soloist, chamber and orchestral musician in recitals both on the concert platform, recording and radio broadcast’s.
Sharron works regularly with the BBC Scottish Symphony Orchestra, Royal Scottish National Orchestra, Scottish Opera, Trondheim Symphony Orchestra, Scottish Chamber Orchestra and the Royal Northern Sinfonia. She also works with several International Orchestra’s, including the BBC Symphony Orchestra, Scottish Ensemble, Arctic Philharmonic, Royal Ballet Sinfonia, Orchestra of the Age of Enlightenment to name a few, and also held positions on West End and touring Musicals, along with playing for many pop & film sessions
Sharron is a keen soloist and chamber musician, having appeared as soloist with the Royal Northern Sinfonia and the National Girls Choir of Scotland. She is a member of the innovative Bardic Trio [with Tenor,Jamie MacDougall & Guitarist, Matthew McAllister] who have just released their debut CD and the Clyde Duo performing in recitals across the country, including at the St Magnus Festival, Edinburgh International Festival, Cottier Chamber Project, Lammermuir Festival, Sound festival and Celtic Connections, Sharron is a Lecturer of Pedal Harp at the Royal Conservatoire of Scotland, Harp teacher at St Andrews University, Douglas Academy and a regular harp tutor for the National Youth Orchestra’s of Scotland.
www.sharrongriffiths.co.uk