Formed in 2010, the Clyde Duo originally with flautist Yvonne Robertson and harpist Sharron Griffiths, in 2019 the line-up changed and Sharron is now joined by the renowned flautist Aisling Agnew. Aisling and Sharron share a compelling interest in the flute and harp repertoire and have performed together across the UK and internationally.
​ 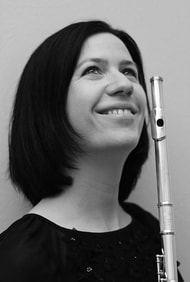 ​Aisling was born and raised in Belfast. She regularly performs worldwide and has been broadcast on BBC Radio, RTE Lyric FM and Classic FM. Aisling has given many high profile concerts including her Wigmore Hall début, Belfast Festival, and the National Flute Association’s 40th International Convention at Caesar’s Palace in Las Vegas. Aisling is a graduate of RCS and Guildhall School of Music & Drama. In 2006 she released her acclaimed début album Recital and has gone on to record several solo and chamber CDs. As concerto soloist she has appeared with various orchestras including the Ulster Orchestra and Royal Scottish National Orchestra and she performs in various ensembles; Hard Rain Soloist Ensemble, Irish Memory Orchestra and her long established flute and guitar duo with Matthew McAllister. Sharron started playing the harp at the age of ten in her native Wales, she has pursued a diverse and varied career as a soloist, chamber and orchestral musician in recitals both on the concert platform, recording and radio broadcast’s.
Sharron works regularly with the BBC Scottish Symphony Orchestra, Royal Scottish National Orchestra, Scottish Opera, Trondheim Symphony Orchestra, Scottish Chamber Orchestra and the Royal Northern Sinfonia. She also works with several International Orchestra’s, including the BBC Symphony Orchestra, Scottish Ensemble, Arctic Philharmonic, Royal Ballet Sinfonia, Orchestra of the Age of Enlightenment to name a few, and also held positions on West End and touring Musicals, along with playing for many pop & film sessions
Sharron is a keen soloist and chamber musician, having appeared as soloist with the Royal Northern Sinfonia and the National Girls Choir of Scotland. She is a member of the innovative Bardic Trio [with Tenor,Jamie MacDougall & Guitarist, Matthew McAllister] who have just released their debut CD and the Clyde Duo performing in recitals across the country, including at the St Magnus Festival, Edinburgh International Festival, Cottier Chamber Project, Lammermuir Festival, Sound festival and Celtic Connections, Sharron is a Lecturer of Pedal Harp at the Royal Conservatoire of Scotland, Harp teacher at St Andrews University, St Mary's Music School, Douglas Academy and a regular harp tutor for the National Youth Orchestra’s of Scotland.
www.sharrongriffiths.co.uk
Powered by